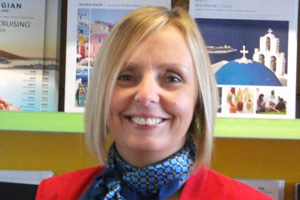 Jo Farrell has a lot to thank her husband Chris for. It was he who gave her the encouragement, confidence and support to set up her travel agency Holidaze nine years ago on her own.

Jo, who “fell into travel” after working at her aunt’s travel agency in Birmingham, took the plunge to start her own business when the couple moved to Bournemouth.

“My husband said I should start up on my own. I said I couldn’t do it, it was too scary!” recalls Jo. “If I’m honest, he had more faith in me than I had. If he hadn’t encouraged me I wouldn’t have done it.”

She adds: “We bought a property and for the first six months I was working on my own six days a week trying to get established. It was hard.”

Hubbie Chris is also a director in the business, but is not involved in the day-to-day running of the shop, which started off as a managed service agency under the Elite Travel Group and now has its own Abta licence.

In addition to Jo, Holidaze employs two part-time staff, has a strong following of regular clients, and has fought off competition to become the only agency in Kinson after Bath Travel, which had a branch opposite Holidaze, closed its doors in 2011.

The agency has also found a successful way to secure new customers and promote its business on a larger scale – by hosting an annual holiday show.

“We decided that a good way to get ourselves known would be by having a travel show for existing and new customers,” says Jo.

“The first year we did it we had 15 suppliers. We didn’t know how many people would attend, but 80 turned up, we got some bookings, and the feedback from operators was good so we decided to do it again.”

The agency’s third travel show, held this year at the Village Hotel in Bournemouth, attracted 140 customers, with 19 operators hosting stands.

“Although we’ve only got one shop, having a show gives a perception that we are bigger,” says Jo.

“At the first show people came along who had never heard of us. Now they ask when our next event is.”