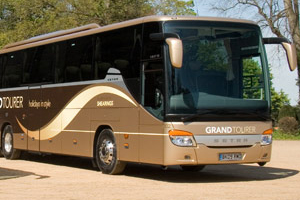 Escorted tour specialist and hotel operator Shearings Group has reported a 6% increase in earnings to £5.8 million in 2013.

The Wigan-based firm said this improved position came on the back of a 2.6% increase in passenger numbers to 1.05 million.

It said this reflected “strong demand from its core over-50s customer base”.

For the year to date, Shearings said total bookings were up 4% and bookings for this summer up 2% despite the wet weather in February.

The increase in bookings, alongside margin improvement and cost reductions, led to a 6% increase in earnings (EBITDA) to £5.8m, up from £5.5m in 2012.

Shearings said it has continued to invest in its coach fleet, hotel estate and systems.

In the last twelve months Shearings has taken delivery of 68 new Setra coaches as part of a £16 million order. This has taken its total fleet to 240 coaches with an average age of 4 years.

Turnover during the year was flat at £195m reflecting a changing product mix and the group’s decision not to operate its ocean cruise programme.

Denis Wormwell, chief executive of Shearings Group, said: “This is the second successive year of improved financial results for the group against a challenging backdrop of unfavourable weather in the earlier part of the year and continued pressure on consumer spending.

“Our loyal customers are experiencing the benefit of our ongoing investment programme in hotels, coaches and digital technology, and we’ve attracted thousands of new customers with our ever-expanding range of short and long breaks in the UK and overseas markets.”

Over a third of the group’s bookings are now made online and Shearings says it expects this to increase to 50% by 2015.

The company has invested in new mobile websites for its Coast & Country and Bay Hotels brands, making it easier for customers to book.

Wormwell added: “The ongoing rise in bookings and customer volumes has given us the confidence to continue the significant capital investment in our hotel estate.

“Over the next two years will be investing nearly £10 million in room upgrades and facilities which we expect to increase further our repeat booking rates and customer loyalty.”