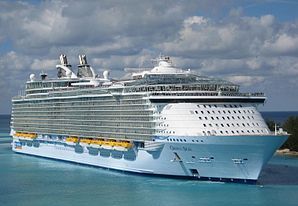 A fourth giant Oasis-class ship for delivery in 2018 has been confirmed by Royal Caribbean Cruises.

The decision to move forward on the order for another giant 2,700-cabin vessel came today at the keel-laying ceremony for the third Oasis-class ship at the STX shipyard in Saint-Nazaire, France.

Chairman and chief executive Richard Fain said: “The Oasis Class was a revolution in maritime design when it was launched in 2009.

“Oasis of the Seas and Allure of the Seas continue to be in a class by themselves both in terms of guest satisfaction and financial returns. Today’s announcement is a reflection of their success.

“We are thrilled to announce the order of a fourth Oasis-class ship during the keel-laying milestone of the third.”

The order is subject to satisfaction of financing, the company said.

Oasis III will be approximately 20% more energy efficient than Oasis of the Seas and Allure of the Seas.

The fourth Oasis-class ship will further build on that efficiency, according to the company.