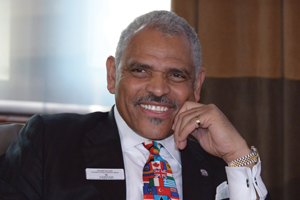 The chief executive of Carnival Corporation believes that additional capacity introduced by MSC Cruises’ two new ships may present challenges for the sector as a whole.

But he insisted that the two new-builds announced by the line on Thursday would have only a “tiny percentage” impact on the wider industry.

Speaking during a conference call with journalists, Arnold Donald said there would be a risk that “psychological pricing” which could be introduced by MSC to fill its extra capacity could have a negative impact on rival lines as they targeted improved financial performances.

But he admitted that coverage of the two new ships should also create incremental demand and “soften the beachhead” to attract new-to-cruise customers.

Donald backed comments from former Carnival Cruise Lines chief Bob Dickinson, who claimed that the industry had not done enough to drive sufficient demand to support the growing number of new ships being built.

And he insisted that the secret lay not in improving passenger numbers, but in increasing yield by raising onboard revenue and average prices by relatively small amounts.

“The reality is that ships sail pretty full, so you’re not going to grow just by putting more people on ships,” he said, adding that “extraordinary improvements” could be generated by increasing revenue and better utilising Carnival Corporation’s economies of scale.

“We are around the fifth largest purchaser of air travel in the world, but we haven’t acted like that,” he said. “We have acted like 10 separate brands.”

Donald said employing best practice alone could improve ticket prices by two to three dollars, and said the number of cruise nights offered by the company’s 10 brands meant that “dollars per ticket is a lot of money”.