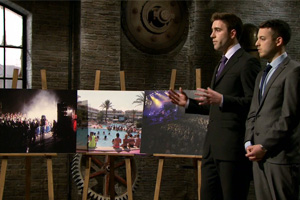 Aden Levin and Rob Tominey of Mainstage Travel received offers from four of the five dragons and gave Piers Linney 15% of their business for a £100,000 investment.

Since appearing on the show the pair have put together a commission structure and are selling more of their clubbing and festival holidays through independent agents. Levin said a number of agents from Hays Travel Independence Group were booking packages.

Levin said agents had the opportunity to earn a base commission of 10%, which would increase depending on the number of bookings made.

“We’re really looking to work a lot more with the trade,” he said. “We do a small amount of bookings through agents at the moment but we want to increase that to around 10% to 15%. It’s small numbers at the moment but it has potential to grow.”

The duo now hope to work with more operators to push their packages and have partnered with Travel Republic.

“They have the hotels and we have the festival tickets, so together it works well,” Levin said. “Plus the demographics for both is very similar.”

The majority of packages do not include flights but Levin said Mainstage was in the process of increasing its Atol licence ahead of plans to drive up flight-inclusive packages next year.