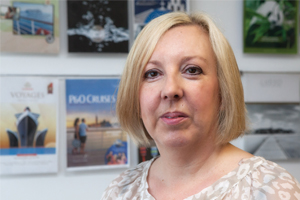 Amanda Eulenkamp knows a thing or two about turning a crisis into a positive experience. Two of Travel Solutions’ five branches have flooded in the past six months.

The company, which celebrates its 21st anniversary this year, has now relocated its Bromley branch to larger premises and refurbished its Guernsey offices.

Amanda, who runs the company with husband and managing director Fred, says: “We were very practical about it. It’s devastating, but you have to be positive. It’s our livelihood, we had to keep the business going.”

The Bromley branch flooded on Christmas Eve following heavy rain. “The back office was flooded, but staff could carry on in the front,” she says.

Shortly after Christmas an opportunity arose to move to bigger premises in the same road, with space for in-store promotions and events. With refurbishment under way at the new Bromley branch, Amanda certainly didn’t expect to be dealing with yet another flood. But in February, a freak wave flooded the Guernsey head office.

“The whole row of shops was affected. The shop was flooded with three inches of sea water. Everything was ruined,” she recalls.

The shop has been refurbished using money claimed on its insurance policy while staff worked from the upstairs office.

The main problem was not having a shop for two months, says Amanda. Instead, the company created “pop-up offices” by sending staff to clients’ homes or coffee shops.

“We did have a dip in sales but we kept going and drank a lot of coffee,” says Amanda, who worked with the company’s design and public relations firm to create a marketing campaign for the local radio station and newspaper inviting clients to “have a coffee on us” (pictured) at pop-up offices.

The Guernsey and Bromley shops reopened in the same week after being refurbished. New features include curved desks, animal-print furniture, and in Guernsey there is a fridge filled with mini bottles of Prosecco for clients and an illuminated bar with tickets behind it.

“We wanted to have a luxury feel and be a bit quirky,” says Amanda. And she’s already moved on to her next challenge – to organise a charity ball to raise £3,000 for breast cancer support group Pink Ladies.