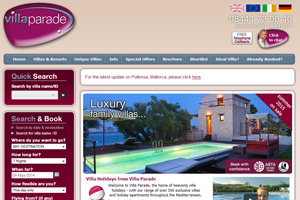 Abta has refuted allegations in a national newspaper that it failed consumers over the failure of villa-rental company Villa Parade which went bust last month owing customers more than £3 million.

The Telegraph claimed Abta “ignored warnings the company was in dire straits before it went under” and reported “thousands of British holidaymakers” face chaos.

Abta hit back saying it received a single “warning” about Villa Parade from rival villa company Travelopo on April 9, a month before the firm went into liquidation.
The association described the Telegraph article as “imbalanced and misleading”

An Abta spokesman said: “We first heard about a potential problem via Travelopo on April 9 and we launched a code-of-conduct investigation straight away. There is no record of anything before that.”

He said: “There are about 1,700 forward bookings, and we’ve contacted all those with accommodation-only bookings. They will definitely get their money back.”

About 1,300 of the advance bookings are accommodation only. The remainder should be dealt with by the Civil Aviation Authority, or credit-card companies, if involving a flight.

In a statement, Abta said: “We believe the article published in the Sunday Telegraph is imbalanced and misleading and we are writing to the editor to complain.

“The article implies Abta was at fault in not ‘acting sooner’ prior to Villa Parade’s collapse, despite the fact we initiated a Code of Conduct investigation immediately a complaint was registered against Villa Parade on April 9.

“The article also implies that a number of customers have been left out of pocket being ‘forced to pay twice’, when in fact these customers will receive a refund, either from Abta or their credit card company.

“Further, the article does not, we believe, fairly reflect the fact that Abta has helped thousands of customers to process their claims, including expecting to pay out around £1 million directly in claims.

“In the article, Travelopo is quoted as a neutral source without mentioning the fact that Travelopo was an Abta member and its membership was terminated by Abta in April 2014, following the company’s failure to meet our financial criteria.”