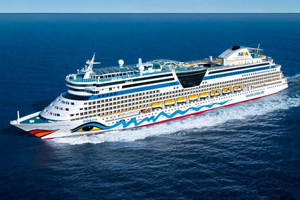 Sharpnel from rockets fired by radical Palestinian group Hamas are reported to have landed on the deck of a German cruise ship as it left the Israeli port of Ashod.

Hamas is believed to have fired the rockets at Israeli targets and that the AIDA Cruises ship was not a target.

The rockets were destroyed by Israeli Defence Forces.

The 2,050-passenger ship was leaving port when sirens began to sound, warning Israeli cities of attacks, according to German news reports.

There was no damage to the ship AIDAdiva (pictured) and all passengers and crew members were unharmed.

The ship is on a seven-day eastern Mediterranean cruise from Antalya in Turkey.

Ashod, Israel’s fifth largest city, is located south of Tel Aviv and west of Jerusalem and is the largest port in Israel.

Hamas earlier said its members fired rockets to respond to “Zionist aggression”, after accusing Israel of killing five of its fighters.

Israel responded with air strikes on the Gaza Strip – to the south of Ashod – reportedly injuring at least 15 Palestinians.

The Israeli military said its offensive was part of a campaign targeting Hamas militants, the BBC reported.

Tension in the region has risen in recent days over the murders of three young Israelis and a Palestinian teenager.

AIDA Cruises is operated by the Carnival Corporation and caters for German-speaking passengers.

More than 70 rockets were fired into southern Israel from Gaza yesterday, according to the Foreign and Ccommonwealth Office.

“You are advised to exercise caution if travelling in the vicinity of Gaza, and to check and follow local security advice,” the FCO said.