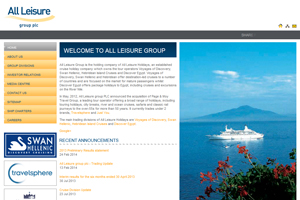 Winter losses at All Leisure Group increased by more than £2 million to £15.6 million as revenue declined.

The figures for the six months to April 30 compared to a loss after tax of £13.4 million in the same period a year earlier. Revenue for the half year was down from £53.2 million to £49.1 million.

All Leisure said both tour operating and cruise performed in line with expectations despite a “significantly reduced” river Nile programme due to political unrest.

The company reported that 85% of budgeted escorted tour revenue and 91% of budgeted cruise revenue for the full year has been sold.

But two Black Sea cruises with calls in Ukraine and Crimea have had their itineraries revised due to civil unrest in the region and customers have been offered the opportunity to cancel or transfer to other departures.

“These two cruises are currently being offered with revised itineraries and the financial impact of these two cruises will not be known until later in the year,” the company said.

“Looking further forward, the successful integration of the tour operating business and consequent restructuring program have placed the group in a stronger position to maximise the benefits of the increase in year-on-year revenues that we are seeing for 2015.”

All Leisure said it remained committed to its previously announced plan to dispose of the ship Discovery – in use by Cruise and Maritime Voyages – at the end of the financial year.

“Going forward, this will have a beneficial impact on the financial performance of the group,” a statement issued this morning said.

Chief executive Roger Allard said: “The recent political and civil unrest in the Ukraine and Crimea has regrettably led to cruises being rescheduled and has resulted in a large number of cancellations.

“We are currently reselling the cabins with two revised itineraries; these cruises are departing August and October respectively.”

The group is seeing benefits from the integration of its tour operating and cruise divisions with cross-selling opportunities.

“I am excited for the future of the group following the successful integration of Page & Moy where full year synergy savings in excess of £1.5 million have been achieved and our decision to reduce the risk of the cruise division by our proposed disposal of mv Discovery,” Allard said.

Looking forward, he added: “We believe that we have laid solid foundations for future growth which can be enjoyed once the wider economic environment and trading conditions improve.”