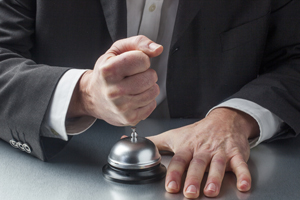 The claim is made by health and safety expert CheckSafetyFirst.com which says more than half (54%) of guests fail to complain about hotel cleanliness issues.

Now the company is calling on both travellers and hotels to raise expectations of what is acceptable in order to limit dangerous hygiene risks.

Only a quarter of UK hotels score top marks (5 stars) for cleanliness, according to figures from consumer watchdog Which?.

CheckSafetyFirst is urging consumers to put hotels under constant pressure to ensure rooms are kept spotless.

“The internet is a powerful tool for travellers because people can read reviews or ask questions of hotels before they arrive. That said, often these gripes aren’t picked up by hotel staff,” he said.

“If you have an issue with a hotel, it’s vital to communicate the problem to a member of staff so it can be dealt with quickly.

“Even the most basic issues, if left untreated, can manifest into a cause for concern in terms of hygiene. While hotels should be monitoring standards carefully, if this is not being done correctly, it is up to travellers to demand this.

“Often people feel embarrassed to complain about issues they have, especially if they haven’t paid a massive amount for a hotel room, but it shouldn’t matter how much money has been spent.

“If you are a guest in a hotel then your room should be spotless and maintained to a high standard. If not, what can seem like a trivial issue at first can lead to more severe problems such as an injury or illness.”