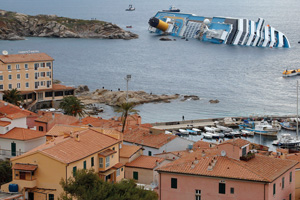 Salvage workers today started attempting to refloat the Costa Concordia more than two years after it sank off the Italian island of Giglio.

Divers and engineers will oversee the operation to raise the 114,500-tonne ship, which may still contain the body of one of the 32 people who died in the disaster.

The ship’s owner, Costa, hopes to finally raise the rusting vessel from the sea-bed in a week-long operation before towing it away to be scrapped in Genoa.

Engineers plan to raise the vessel from the artificial platform where it has rested since it was righted in another large-scale operation last September, the Times reported.

Nick Sloane, the South African salvage master in charge of the operation, was reported as saying this morning: “The risks are that the ship could bend as it is raised, or the chains underneath it could snap.

“There will be 42 people on board during the first manoeuvre. If disaster strikes we will evacuate through emergency escapes on the bow and stern.”

Once the ship is successfully raised off the platform, air will slowly be pumped into 30 tanks or “sponsons” attached to both sides of the 290-metre Concordia to expel the water inside and raise the ship.

The ship’s captain, Francesco Schettino, is on trial for manslaughter, causing a shipwreck, and abandoning the vessel before all passengers had evacuated.

Russel Rebello, an Indian waiter, is still missing and the refloating will include a new search of the ship as it is raised that may finally recover his body.