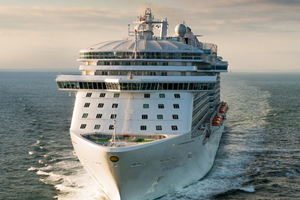 Princess Cruises’ UK boss has insisted a reality TV show about life on board one of its ships will be positive for the sector – despite admitting there had been some “extreme views” about the first episode.

Paul Ludlow, managing director UK and Europe, said agents should take advantage of the publicity around ITV’s The Cruise Ship, which was filmed on board Royal Princess.

The first episode on Friday attracted 3.1 million viewers and there were more than 1,000 tweets related to the show.

Ludlow said social media often reflected “extreme views”, but insisted that feedback from agents had been positive and supportive.

He said: “When you do something as big as a TV show, it is always going to attract different views. This is putting the spotlight on the whole industry and it’s exciting. Agents need to make sure they capitalise on it and engage their customers about it.”

Comments on travelweekly.co.uk reflected a mixed response to the show. One poster claimed to have had to reassure a customer who had enquired about cancelling a booking with Princess.

But GoCruise’s Flavia Gray said the show was helping her with enquiries.

“I did an event on Saturday and it was a great talking point,” she said. “Some loved it and some said the passengers were off-puttingl; the fact they had seen it though means I can engage with them.”

Claire Brighton, of Advantage Travel Partnerships, said the show had focused too much on personalities and failed to showcase the true onboard experience.

She said: “I’m not sure people will learn too much about the experience on board; however I don’t want to judge it based on just the first show alone. I don’t think people can say its bad for cruise based on one episode, I’m keen to see what’s next.”

Everley Mudkins, of cruise.co.uk, said: “I thought the first show did not portray the amazing facilities and experience the Royal Princess has to offer. Having been on board myself I was wowed by the atrium but on the show it looked a little lack-lustre.

“I am very much looking forward to the next shows and to really see the Royal Princess in all her glory.”