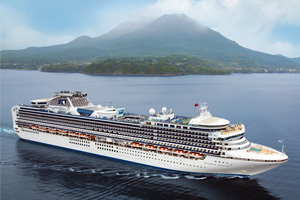 Princess Cruises is launching its “most lucrative” incentive as it looks to help encourage agents to book holidays across more destinations.

Alex White said previous campaigns had encouraged bookings in key markets such as Europe and the Caribbean, but that its new offering was aiming to get agents selling across its six trades. The Three for Me campaign, which launches on Monday and runs until the end of November, will run alongside a consumer campaign called Three for Free.

The consumer offering will see customers who make a booking between September 1 and November 30 benefit from a free balcony upgrade, 200 minutes of free internet and a choice of free car parking, coach transfers or up to $200 onboard spend. The offer is on selected 2015 sailings.

White said the line was focusing on 2015 now as the majority of ex-UK and Europe sailings for this year were sold out and capacity was very limited.

“We launched last year’s Cruise Extra campaign earlier than we did in 2012 and now we’re launching this campaign early as we look to keep that momentum going and get ahead early for 2015.”

The agent incentive involves agents filing out their Princess passport with their booking number and entering the competition at redletterdays.co.uk/princesspassport

The prizes are dependent on the number of bookings the agents make. Those who make one booking on one destination will be entered into a prize draw to win a £10 voucher – with 300 available each month.

Agents making one booking on three or more destinations will be in with the chance to win one of three cruises, with one available each month.

The competition restarts at the end of each month.