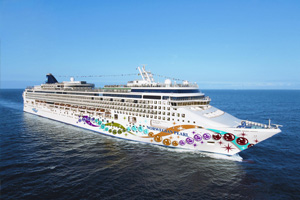 Norwegian Cruise Line was last night reported to be in “advanced talks” to take over the parent company of luxury lines Oceania and Regent Seven Seas Cruises for around $3 billion.

Reuters cited “people familiar with the matter” and said a deal could be announced as early as this week.

A deal would give Norwegian, a company with a market value of $6.8 billion, access to Prestige Cruise Holdings’ luxury ships and affluent clientele as it competes with larger rivals Carnival Corporation and Royal Caribbean Cruises.

Miami-based Norwegian Cruise operates 13 cruise ships in North America, the Mediterranean, the Baltic, Central America and the Caribbean. It had revenues of $2.57 billion in 2013, up 13% from 2012.

Oceania and Regent together have eight cruise ships operating worldwide. Prestige posted revenues of $1.2 billion in 2013, up 6% from the year earlier.

Prestige registered with US regulators for an initial public offering in January. Apollo has been the company’s majority shareholder following an $850 million deal in 2007.

Apollo made a $1 billion investment in Norwegian in 2008 and the company went public in January 2013.

Norwegian and Prestige representatives did not respond to requests for comment, while an Apollo spokesman declined to comment, according to Reuters.