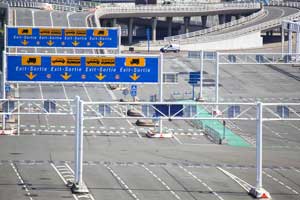 The mayor of Calais has threatened to block the port unless the UK does more to control the number of illegal migrants.

Natacha Bouchart said that her town was being taken hostage by about 1,300 migrants from the Middle East, Asia and Africa who are attempting to cross the English channel from France.

She said that the migrants were costing too much and making life unpleasant.

The mayor complained that British immigration policy made the UK be seen as “an Eldorado” by immigrants.

“I could take the decision to block the port. I could bring pressure to bear,” the BBC reported Bouchart as saying in Paris after discussing the problem with French interior minister Bernard Cazeneuve.

“It would be illegal,” she accepted, “but today I want to make a strong gesture towards the British.”

The mayor said that while she had not discussed her port blockade idea with Cazeneuve, she urged him to open “strong negotiations with the British”.

The minister – who was in the UK last week – has appealed to Britain to help finance security at the port, ministerial sources quoted by the AFP news agency said.

Bouchart said Cazeneuve had approved her proposal to create a day centre for migrants.

Calais is the nearest French port to England and millions of British tourists travel through the town every year.