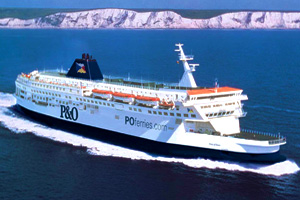 Illegal migrants in Calais have attempted to force their way onto a P&O Ferries vessel bound for England.

Passenger John Bailey told the BBC that the migrants tried to get access to the vessel by running up the main ramp.

But he said they were prevented from gaining entry when the crew raised the ramp and turned a fire hose on them.

P&O Ferries confirmed there had been a “huge intrusion”.

Two attempts were reportedly made to board the ferry. In the first about 85 migrants forced their way through a gate and climbed over fences, overpowering security staff.

They were foiled when crew raised the ramp before they could get to the ferry.

A second attempt – made by about 150 migrants who also succeeded in gaining entrances to the port – was frustrated when police moved in to detain them.

Mayor of Calais Natacha Bouchart said on Tuesday she would blockade the port unless the UK helped to control the migrants who had taken the town “hostage”.