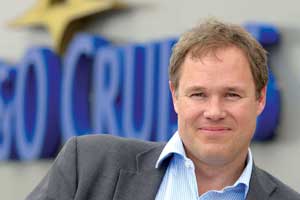 Carnival UK is encouraging all members of staff to ‘adopt a travel agent’ as part of an initiative to help them better understand how the trade works.

The 1,200 staff across all departments and brands in the company’s Southampton office are being invited to link up with their local agent as Carnival UK looks to bolster its ties with the trade.

The move comes after a turbulent few years for Carnival UK. The P&O Cruises and Cunard brands were previously accused of undermining support for agents when they cut commission to 5%.

Christopher Edgington, marketing director for P&O Cruises, said agents remained key for the brand, adding that the line had worked to stress that this year with new marketing campaigns, incentives and increased commission.

He said the adopt-a-travel-agent scheme aimed to build bridges with the trade further. Edgington also believes it will help reach agents currently not making many cruise bookings.

“It has been a year of real change for me, P&O Cruises and Carnival UK as a whole,” he said. “We did need a step change with our trade partners and we’ve introduced new things through our Agent Matters programme.

“We’re engaging more and part of that is the new adopt-an-agent programme, which has just been launched internally.

“We’re encouraging everyone, whether they work in HR, finance or marketing, to get involved and start interacting with the local travel agent where they live.”

Edgington (pictured) is to adopt three agencies – in Newbury, Berkshire, and in Northallerton, North Yorkshire, where he met agents during his first few weeks with Carnival.

He said the scheme was not compulsory and staff were not expected to give ‘their’ agency the hard sell.

The idea is for staff to “pop in and say hello” from time to time and learn about the agency.

Edgington added that if some staff members wanted to go to agencies with marketing collateral and be “an extension of the sales team”, they would be advised accordingly and given the right information.