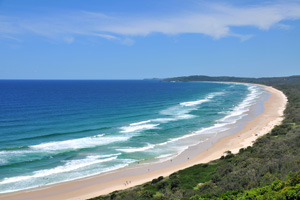 A man has been killed in a suspected shark attack off a beach in the popular Australian tourist destination of Byron Bay.

He was bitten on his leg today while swimming at the resort in New South Wales – the most easterly point on the Australian mainland.

Other swimmers brought him in to the beach but he was pronounced dead shortly afterwards, the BBC reported.

Beaches in the area were shut for 24 hours and people were warned to stay out of the water.

“At 10.45am police and paramedics were called to Main Beach after reports of a shark attack,” New South Wales police said.

“He was seen floating in shallow water, close to the shore line, and dragged onto the beach. An ambulance was called and he was pronounced dead a short time later.”

Inquiries into the identity of the man were ongoing, police said.

A shark had been seen in the area before the attack, according to local reports.