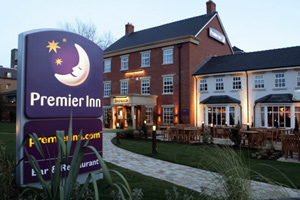 Buoyant trading from UK regions helped boost sales at the UK’s leading budget chain Premier Inn by almost 15% in the quarter to mid-August.

The growth was helped by the improving economy as well as special events, including the Farnborough Airshow and the Commonwealth Games, according to Andy Harrison, chief executive of parent company Whitbread.

Premier Inn increased capacity by 5.6% in the period to August 14, plus there was 8.6% growth in total revenue per available room and a rise in total occupancy of 3.1% points to a record high of 87%.

“We plan to open around 4,500 new Premier Inn rooms and five joint site restaurants along with around 300 net new Costa stores this year,” Harrison said. “Our committed pipeline has grown to around 13,000 UK rooms.”

Whitbread has acquired three further freehold hotel sites in London – Clapham, Sutton and Westminster – with capital expenditure now expected capital to be around £500 million, up from £400 million.