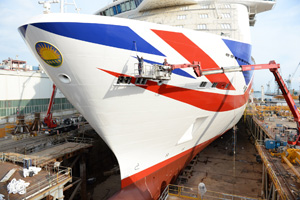 The finishing touches to new Union flag livery on P&O Cruises’ new ship Britannia have been made at the Italian yard where the ship is being built.

The new look on the bow features the world’s largest contemporary version of the Union Flag, which required 420 litres of paint.

The ship will also have two blue funnels carrying an illuminated rising sun motif which depicts the Oriental part of the Peninsular and Oriental (P&O) name on the company’s coat of arms.

The company is to update the livery across all eight ships in its fleet as part of a brand refresh.