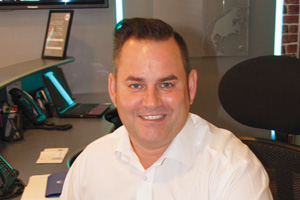 Paul Smith doesn’t do things by halves. When he decided to refurbish his York travel agency on its 10th anniversary, he wasn’t just thinking of a lick of paint.

“We wanted to move with the times and to provide the ultimate customer service and something unique to our clients. You have to keep reinventing yourself,” says Paul, whose long-term vision is to open 10 agencies in the Yorkshire region.

With feedback from customers that the offices felt small, Smith opted to gut the agency and install an open plan design, with new furniture including chairs made from Spitfire metal and umbrellas for clients with leather handles, both specially commissioned for Quartz Travel.

The pièce de résistance? As customers walk into the shop, it is as if they are on an airline runway. Lights run down the sides of the carpet ‘runway’ with a large 3D image at the end.

To promote the changes, he not only enlisted the Sheriff of York and the Sheriff’s Lady to cut the ribbon at a grand opening, but also invited a local radio station to broadcast live from the shop for two hours, with holiday vouchers of up to £1,000 up for grabs.

“We had a queue round the corner of people wanting to get into the shop, we were heaving,” says Paul, whose mantra is never to refuse a customer booking and TO go the extra mile wherever possible on customer service.

“We opened 70 bottles of champagne and we had people booking who had never booked with us before,” he adds.

Paul’s approach appears to be working. The agency’s sales to date this year are 125% up on last year.

“I am constantly looking but nothing excites me at the moment,” admits Paul, who also runs tour operation Colombia Experience.  Watch this  space.