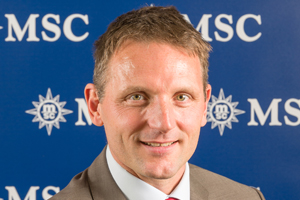 Earlier this year the Italian cruise line announced it would begin paying more to agents for shore excursions, with the initial plan being to increase commission from 5% to 10%.

Speaking at the Advantage Cruise Champions conference in London, executive director Giles Hawke (pictured) said the line had decided to increase that figure even further to 15%.

The new commission structure, which launches today, is a trial which will run for six months.

Hawke said: “We originally said every agent would earn a base rate of 10% commission on shore excursions, but we’ve increased that even further again to 15%.

“It’s a six month trial but the rationale was that I couldn’t see why a travel agent would want to sell shore excursions on behalf of a cruise line for no money. I have thought this for a long time, even when I was in my last role, but I couldn’t get that change then. At MSC we’re doing it.

“MSC has always paid commission on shore excursions. This is an increase because we want to reward agents.”

Hawke said the move could remain permanent if agents support the scheme.