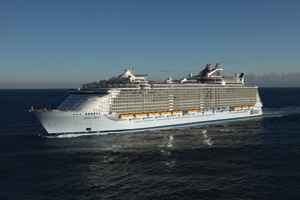 Royal Caribbean hosted 50 Tui agents on board Oasis of the Seas as the ship made its first visit to Southampton last week. Hollie-Rae Merrick reports

Doyle, who is responsible for all relationships with Tui’s suppliers, agents and airports, said  high street agents were good at attracting new-to-cruise customers but less good at retaining them.

She said staff in Tui shops were well versed in how to switch-sell customers to cruise, and claimed high street agents “help the [cruise] food chain”.

“About half of high street agents’ cruise sales are new-to-cruise [passengers]. If you go to a cruise specialist agent you already know you want to go on a cruise; we have ingrained throughout our agents to ask the question ‘have you ever thought of a cruise?’

“The high street agents help the food chain but the challenge for us is to retain those customers. We work hard to get them to switch from land holidays to a cruise, but it’s retaining them that has proven difficult, and that’s what the cruise specialists are so good at doing. We need to get better.

“As a business we work hard to retain customers because it’s really important – it’s much more cost-effective to retain a customer than to try and get new ones.”

Doyle said she was pleased Thomas Cook had recently announced it was putting more focus on the cruise market. She said Tui’s rival’s renewed focus was good because when Cook wasn’t as focused on cruise it allowed cruise specialists to grow their market share.

Agents should get chance ‘to touch and feel the product’

As Royal Caribbean International prepares to welcome 550 agents on board its newest ship Quantum of the Seas next week, UK boss Stuart Leven spoke of the importance of getting agents to experience the product.

Leven said the line had hosted 56 ship visits this year and said the same number would be held next year so agents get the chance to “touch and feel the product”.

“The welcoming of Oasis of the Seas to Southampton heralds the start of an important part of Royal Caribbean history,” he said.

“It’s important agents get the opportunity to experience our ships and see the enhancements made on Oasis of the Seas. It’s particularly important because sister ship Allure of the Seas will be deployed in Europe next year.

“Eight out of 10 bookings  come from the trade and we want them to see the constant innovation of our ships.”

During their overnight sailing from Southampton, Tui agents were split into five groups to compete in Mission Oasis – a challenge to see as many parts of the ship as possible. The winning agents won places on the two-night inaugural sailing on Anthem of the Seas, launching next year.

High street agents will be key to helping Royal Caribbean International achieve its growth ambitions for the UK market.

Royal Caribbean will launch its new ship Anthem of the Seas next April, which will sail from Southampton. The 4,905-passenger vessel will be joined in Europe by Explorer of  the Seas and Allure of the Seas.

He was speaking as Royal hosted 50 Tui agents on an exclusive overnight sailing on board Oasis of the Seas, which sailed into Southampton  for the first time last week following two weeks in drydock.

Bouldin said: “Historically Tui and Royal’s relationship is very strong and it remains like that today.

“Their presence on the high street makes them ideally placed to help us with our challenge to increase cruise and to convince people about the benefits of a cruise holiday. They’ve always been one of our biggest partners and we see no reason for that to change; in fact, we’re always looking for ways to make that relationship even stronger.

“If we don’t find new-to-cruise customers we won’t fulfil our expectations, so retail is key. Clearly there are a few big partners and Tui is one of those who will play a massive role in this.

“We recognise Tui has an online strategy and a retail strategy and both are successful.”Bouldin said 80% of Royal’s bookings come through the trade, 60% of which come from retail and 40% from online.

“There was a day when retail was the dominant party, and now we have some fantastic online partners,” he said. “However, I remain less convinced that new-to-cruise customers will buy online. My instinct tells me we will see more new-to-cruise coming from retail, though I’m sure some of our online partners would challenge that.”

His comments come after Cook revealed it was partnering with Royal Caribbean on six cruise specialist stores. Cook is looking to boost its cruise revenues and is also working with Carnival UK brands in five partner stores.