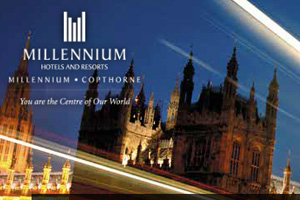 Third-quarter pre-tax profits at Millennium & Copthorne Hotels rose by 6.6% to £50.2 million on the back of an expanded portfolio.

Revenue increased by 6.2% in the three months to September 30 to £215.9 million over the same period last year.

The improvement came as a result of two new hotels, an improved performance across the chain and higher contributions from newly refurbished properties including the Grand Hyatt Taipei.

The company confirmed the acquisition of its first hotel in Rome and the final touches are being made to the 329-room Millennium Mitsui Garden Hotel Tokyo ahead of its planned opening on December 17.

M&C chairman, Kwek Leng Beng, said: “Our newly acquired hotels contributed to revenue and profit in the third quarter, together with the return of refurbished rooms to inventory and stronger trading in regional US and New Zealand.

“Together, these factors helped to improve performance for the Group as a whole despite challenges and economic uncertainties in some of our key markets and the continuing negative impact on reported currency results of a strong pound sterling.”

The group said it continues to monitor closely the situation regarding Ebola.