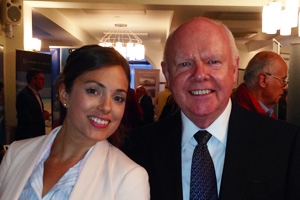 Before Hannah Vincent first started to work for Select World Travel, she hadn’t heard of the agency. Based in an affluent area in a parade of businesses, rather than on the high street, there was no reason why she should have known the agency was there.

But that got her thinking. How many potential customers were there in the area that didn’t know about Select World Travel? And how could that be improved?

So the idea for a consumer show for existing and potential customers in the area was born. “I had always had an idea in the back of my mind [for a show], so we came up with the idea of a Select World Travel Show as a team and then I started to email suppliers,” recalls Hannah.

“The aim was to make more local people aware of us and the concept was like a wedding fair. And we wanted to target the wedding market,” says Hannah, who also came up with the idea for a honeymoon gift service at the agency, which offers couples the chance to have friends and family donate towards the cost of their honeymoon.

What started off as a plan to have 15 suppliers turned into 25 as operators saw the marketing Hannah and her team were putting behind the show.

Not only did the agency have two double-page advertorials in the Bournemouth Echo, it also placed advertisements in a wedding magazine and a directory, which gave access to more clients online to market the event to.

On top of that, Hannah and her staff put in their own legwork, literally, by hand‑delivering invitations to the show to houses near the agency.

In total, 180 people attended and within a week Select World Travel had gained five bookings as a result of the show. The agency also held a raffle and raised £420 for Dorset Air Ambulance.

“We opened at 4pm and our first couple came at 3.50pm and from then on we had a constant flow of people until 6pm,” says Hannah.

“At times you couldn’t move, there were so many people. Suppliers said it was the busiest show they’d ever exhibited at.”Hannah is already planning another show next year.

“We will definitely do it again and next time suppliers might also give presentations. And we had tea and coffee and soft drinks but next year we might have wine too.”