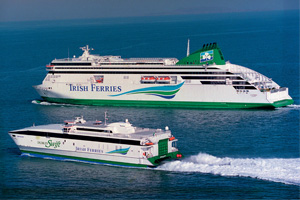 Ferry users face higher costs due to an EU directive being imposed on operations in the North Sea and English Channel from January 1.

Irish Ferries parent company Irish Continental Group issued the warning today although the impact on the company will be restricted to a section of the Ireland to France route which falls within the English Channel.

The EU sulphur directive will cut the level of sulphur in fuel used in the restricted areas from 1% to 0.1%.

“As 0.1% sulphur fuel is considerably more expensive than fuel with 1% sulphur content, the group is engaging with its customers on the requirement to recover this additional environmental cost, which must be borne by the end user,” the company said today.

Irish Continental delivered a 10.3% rise in revenue to €93.4 million in the peak summer three months to the end of September, with the operating profit up to €23.8 million from €22.3 million in the same period last year.

“Summer trading has been encouraging across most business areas, with volume and revenue growth in the passenger, car and roll on roll off segments, partially offset by weaker container freight volumes.”

Fuel costs rose to €14.3 million from €12.7 million year-on-year due to additional sailings by the ferry Epsilon, which was introduced late last year, partially offset by lower fuel prices.

Group revenue for the nine months to the end of September was up to €224.1 million from €205.6 million. Revenue in the ferries division was up 13%.

Operating profit for the nine months was €29 million against €28.7 million in the same period in 2013.