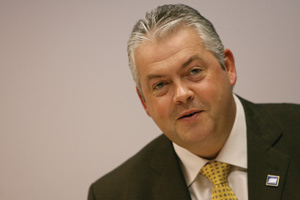 Norwegian Cruise Line has announced a reshuffle of its senior management following the company’s acquisition of Prestige Cruises International.

The line officially announced today that the deal to buy Prestige had gone ahead, following reports of the plan back in September.

Riley will be responsible for business development, marketing, and passenger services in all international markets, including the UK and Continental Europe, along with Asia Pacific, Latin America, Middle East and Africa regions. He will be relocating to the company’s Miami headquarters and will report to Andy Stuart, executive vice president of international for the three brands.

Graham Sadler, currently managing director of Regent Seven Sea Cruises in the UK, will now take on that role for all three brands.

Sadler will oversee the UK business and have a presence in the offices located in London and Southampton. Sadler has led the Regent Seven Seas UK office since 2001.

Bernie Carter will remain responsible for Oceania Cruises’ UK and European business and will report into Sadler for UK-related business.