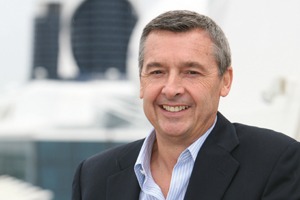 Celebrity Cruises president and chief executive Michael Bayley said he was delighted with the way the single brand approach in the UK market had worked over the past year.

“The UK and Ireland is such an important market for us so we invested in a dedicated team for each of the Royal Caribbean International brands and the trade has really embraced it.

“We’re significantly up for 2014 as a result and we are much further ahead for 2015 than we’re we’re at the same time last year.”

He added that sales for 2016/17 sailings which went on sale recently, four months earlier than usual, were also strong.

Bayley said sales for Eclipse, sailing out of Southampton next summer for its sixth season were good and said he was not concerned the ship would be overshadowed by the likes of sister brand Royal Caribbean’s new ship Anthem or P&O Cruises Britannia being launched from Southampton next spring.

“Eclipse is a well-loved, beautifully-designed successful Solstice-class ship so we are not concerned. We have our own place in the market.

Bayley added that Celebrity had no intention of offshoring its UK & Ireland call centre as Royal Caribbean has done [to Guatamala], despite the fact that initial teething problems with Royal’s move appear to have been overcome.

“Celebrity is a quality brand offering a quality experience and we enjoy and value the meaningful relationships that agents have with our call centre team in the UK and so that’s something we want to protect and develop,” Bayley said.