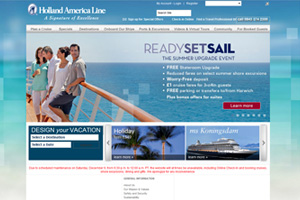 A series of value-added deals have been unveiled by Holland America Line to encourage early bookings for 2015 sailings.

The ReadySetSail promotion of special offers cover selected departures based on bookings during the peak wave period until February 28.

Destinations featured in the promotion include Alaska cruises and land tours, Bermuda, Canada/New England and Europe.

There are also extra offers for suite bookings, including onboard spending credit.

Child fares of £1 are included on bookings by two adults are available on Ryndam seven-night fjords cruises from Harwich and also on many 11-12 night summer Mediterranean cruises on Zuiderdam and Nieuw Amsterdam from Barcelona, Rome and Venice.

Marketing, sales and guest programmes executive vice president, Richard Meadows, said: “This is a great time of year to introduce some of our best promotions when people are thinking about making their summer plans, and ReadySetSail features exceptional savings that we know will entice travellers to book a Holland America Line cruise.

“It’s hard to beat the value of a cruise holiday, and ReadySetSail makes it even more inviting to take a dream holiday with family and friends.”