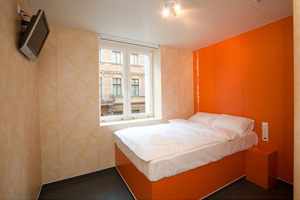 Trading at budget chain easyHotel remains “healthy” on the back of improved revenues for the year to September.

The discount owner, developer, operator and franchisor of “super budget” branded hotels, founded by Sir Stelios Haji-Ioannou, saw operating profits rise by £300,000 to £2 million on revenues up by 34% to £3.5 million.

The figures follow the chain raising £24 million through a listing on the secondary AIM financial market in June.

Occupancy levels averaged 72% for the year with an average daily rate of £34 and revenue per available room at £26.

Owned hotel rooms increased by 195 in the year to 287, with expansion at a property in Old Street, London and a second owned hotel opened in Glasgow in January.

A third owned hotel, the 103-room easyHotel Croydon, was opened last month bringing the portfolio up to 20 in 13 cities across nine countries

Two further franchise hotels are due to open in the first half of 2015 and four more properties are in the pipeline in the Benelux region, subject to planning and financing.

The chain has also started to identify existing buildings in UK cities  that can be developed into hotels.

The company says it is “actively looking” for franchise partners to increase its franchise presence outside Europe, according to chairman Jan Astrand.

However, the company walked away from an unspecified “strategic acquisition opportunity” which would have accelerated growth in Europe.

Astrand said: “Ultimately the board decided not to proceed and easyHotel incurred fees of £0.2m in relation to the transaction. The board remain open to considering strategic opportunities that create value for our shareholders.”

The strength of the brand means that all own hotel customers and many of franchise hotel customers book direct through the easyHotel website, which results in low customer acquisition costs, he added.

“The brand is recognised in many countries and the brand values are well understood by our customers,” said Astrand.

Chief executive Simon Champion said: “The group has made good progress during the year with strong performance from our owned hotels and across our franchised hotels.

“Current trading is healthy and we remain confident on the outlook for 2015, particularly given our recent refurbishment investment at Old Street and other initiatives that are underway.

“EasyHotel is a strong brand with international recognition. Our expansion plans are taking shape and we are confident that we can secure owned properties for conversion in key European gateway cities, as well as expand the franchised estate.

“Our focus remains on delivering a high return on capital for shareholders, as well as providing excellent value for our customers.”