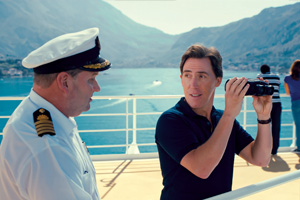 P&O Cruises’ Christopher Edgington reveals the line’s wave advertising campaign, ahead of the launch of Britannia. Report by Hollie-Rae Merrick

P&O Cruises has created a multimillion-pound wave campaign and unveiled a new brand identity as it looks to differentiate itself from other cruise lines in the run-up to the launch of Britannia in March.

The £500 million, 3,600-berth vessel promises to be the line’s most high-profile, but Christopher Edgington, marketing director for the operator, conceded that in the past the brand had not always stood out in the market.

To address this, P&O has revealed a new strapline, ‘This is the Life’, an adapted logo and a TV advertising campaign fronted by comedian Rob Brydon.

Edgington said the advert would help to attract more non-cruisers.

“Our campaign is timed to put cruising on the national holiday map because 1.7 million people have cruised in the past year and it’s time for us as an industry, and for us as Britain’s favourite cruise line, to take the lead,” he said.

In May, commercial director Gerard Tempest told Travel Weekly that “radical changes” were afoot for P&O on the back of customer segmentation data analysis.

The new ad campaign, which will air during Coronation Street on Christmas Day, aims to attract more new-to-cruise customers by portraying a cruise holiday through the eyes of ‘newcomer’ Brydon.

The theme of the ad campaign  is the Britishness of the holiday.

The advert will run throughout next year following its Christmas Day launch and is expected to reach more than 13 million ABC1 adults over the age of 45.

Edgington said: “Rob Brydon was the obvious choice to front the campaign as he is well-loved with a great sense of humour and it is easy for potential customers to imagine themselves in his shoes. With this campaign we aim to create a compelling and distinctive brand that will help us remain Britons’ cruise line of choice.”

P&O Cruises’ new branding includes an adapted logo featuring the union flag wave design that will appear as the hull livery across the fleet’s eight ships.

Edgington said the new identity would help to create consistency throughout the brand, adding: “P&O Cruises’ new look and identity is essentially based around the livery that is on the bow of the ships.

“It really reflects the British element of our company and is something we are very proud of.

“The logo is ‘held’ in a flag design and this will make us stand out much more in our marketing communications and campaigns.

“As the only cruise line dedicated to the British market, we need to celebrate our British offering and by putting a representation of the flag on our logo and our ships, this gives a consistent look. We haven’t had a clear direction before, but this puts us as the aspirational, yet accessible, British cruise line, and it works hand in hand with our new strapline.”

To mark the wave campaign, Edgington said it was important to thank agents for their support and, as part of that, the line is giving away a number of prizes.

He added: “Last year we sorted our commission and the industry accepts we have got ourselves back into a much better place. We have spent the last 12 months working hard with the trade; now, for the wave period, we’re giving agents a chance to win with us.”