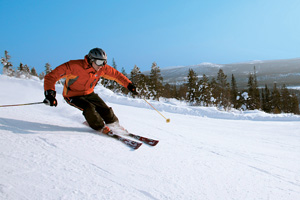 A coroner has said he will write to the Ski Club of Great Britain urging it to encourage skiers to wear helmets following the death of man from Surrey.

Aleksander Owens-Thurston, 23, died in February when he lost control on a steep run at the Austrian ski resort of St Anton.

The experienced skier crashed into a snow machine.

West Somerset coroner Michael Rose, who recorded the death as an accident, said the snow machine’s markings were “probably inadequate,” the BBC reported.

Owens-Thurston died in St Anton during the first day of a holiday with his parents, younger brother and godfather. He was not wearing a helmet when he crashed.

Rose said: “These snow-making machines are increasingly used, and I suspect this year more than ever, as resorts try and have a full season and cannot afford to lose customers if there are not adequate amounts of snow.

“Sadly, I think Aleksander did not appreciate the difficulties he was facing coming down the slope.

“What I think happened is that for some reason he fell or lost control, probably coming down on to the blue run, and as a result he hit the boom [of the snow machine] with enormous force.

Rose added: “Whether padding on the boom would have assisted… it certainly might have helped. Also I do urge everyone these days to wear helmets.

“One reads and hears of many cases where people’s lives are saved. Sadly, he died very shortly after the incident.”