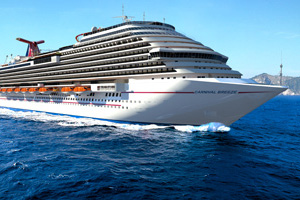 Carnival Corporation has reported a higher-than-expected profit for the fourth quarter.

The rise in profits came following a boost in ticket prices and customers spending more on board. Strong profit improvements from Carnival Cruise Lines and Costa Cruises were also attributed to the growth.

Arnold Donald, president and chief executive officer of Carnival Corporation, said: “Full year earnings were significantly higher than the prior year primarily due to strong profit improvement at both our Carnival Cruise Lines and Costa Cruises brands.

“We enjoyed some early wins from our collaboration efforts that contributed to our improved results, particularly for onboard revenues. We worked hard to contain costs and achieved an almost 5% reduction in fuel consumption for the year as we continue to implement energy conservation measures. We also made a number of strategic decisions in fleet investments that will position us well for the future.

Costa Cruises’ Asia operations achieved double-digit revenue yield improvement on a capacity increase in that region, according to the company.