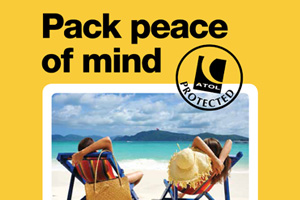 The latest Pack Peace of Mind campaign by the Civil Aviation Authority made its TV advertising debut on New Year’s Day.

The family-focused 2015 campaign to run during the January peak booking period encourages households to look beyond the price and make sure their air holiday is Atol protected.

The animated family of suitcases, led by matriarch Justine Case, feature in a 30 second television advert to be aired across ITV1, ITV2, ITV 3 and ITV 4, and other channels including Sky Living, Sky Atlantic, True Drama, Yesterday and the Cartoon Network.

The imagery will also feature in digital adverts on Facebook, along with newspaper and magazine adverts, and be part of an updated Atol Pack Peace of Mind website.

The campaign will also be publicised across the CAA’s Atol specific social media channels, Twitter @packpeaceofmind and Facebook facebook.com/ATOLProtected.

The combined publicity aims to remind families to ensure their travel company is Atol protected and that they receive an Atol certificate, which means their money is safe and secure should their holiday company collapse and those already abroad will be flown home.

CAA deputy director of consumer protection David Moesli said: “In the last three years the number of Atol protected bookings has increased year-on-year – meaning more holidaymakers are now financially protected and our Pack Peace of Mind campaign has played an important role in this.

“This year we aim to build on these achievements by encouraging families to look beyond the price and make sure their annual holiday is Atol protected and they receive an Atol certificate, as soon as they’ve booked.

“In developing our latest campaign we have created new animated imagery, which we think will resonate with families and will be featured across print and broadcast media during January – the peak booking period.

“It is vital people take these messages on board and check for Atol protection before they book an air holiday.”