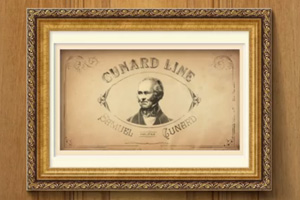 An animated timeline marking 175 years of ocean travel has been released by Cunard on its website today to mark its anniversary year.

The line has also introduced a new social media campaign showcasing the type of images that would have been taken over the generations on board its ships if modern technology, like the smartphone ‘selfie’ phenomenon, were around at the time.

The two-and-a-half minute animation takes viewers on a journey through some of the company’s most significant moments in the last 175 years.

The timeline begins in 1840 with Sir Samuel Cunard as Britannia makes its maiden transatlantic voyage to Halifax, Nova Scotia. As this unique journey continues, the viewer is drawn through history, taking in Cunard’s participation in WWI, the first world voyage in 1922 by Laconia, and the glamour and glitz of the 1950s.

Cunard marketing director Angus Struthers said:   “For those unfamiliar with Cunard, it’s difficult to comprehend how much of a role the company has played in shaping the world of ocean travel as we know it today.

“This year is our 175th anniversary and we are proud to be able to showcase everything we have achieved in this time.

“We have so much planned for 2015, including events across the globe which we hope as many people as possible will join us for and take their place in our history books too.”

Simon Attwater, group creative director at marketing and technology agency DigitasLBi which worked to help create the animation, said: “As a history geek, the chance to look back at Cunard’s illustrious 175 year history was a dream of a brief.

“Rifling through the annals was a delight and turned up wonderfully individual and quirky facts. We’ve woven them into a two and a half minute story that celebrates what it is that makes Cunard unique.

“Most brands don’t have the luxury of an illustrious story that has literally changed history. Consequently many attempt to make one up.

“However, Cunard is different. After spending considerable time with the Cunard historian, Michael Gallagher we were blown away by the rich heritage of the company.”