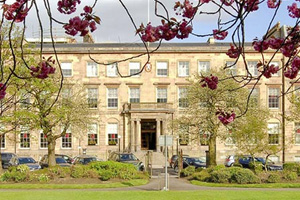 Glasgow’s only five-star hotel and a boutique property in Edinburgh have been sold to US private investment firm Starwood Capital Group.

The luxury Blythswood Square in Glasgow (pictured) and the Bonham in Edinburgh, which operate under the Town House Collection brand, have been acquired for an undisclosed sum.

The deal expands Starwood Capital’s UK portfolio to 53 owned and leased hotels, including the historic George and Roxburghe in Edinburgh and the Grand Central Hotel in Glasgow.

The Town House Collection was founded by Scottish hotelier Peter Taylor in 1989. It employs 270 staff across the two properties and has revenue of about £12 million.

The Bonham is located at Edinburgh’s West End and has 49 rooms.

Taylor stressed that selling had not been on the agenda for 2015, as both hotels continued to perform well.

But he said: “The approach captured our attention, the deal was right, and the timing will allow me to focus on new challenges, knowing that the company and, most importantly, our team members will be in safe hands.”

Managing director Hans Rissmann and finance director Russell Hynd will continue to work alongside the new owners in a consultancy capacity to ensure a smooth transition.

Cody Bradshaw, senior vice president and head of European hotels at Starwood Capital, said: “We are thrilled to add Blythswood Square and The Bonham to our rapidly expanding collection of UK hotels.

“We have become intimately familiar with the vitality and potential of Glasgow and Edinburgh through our management of the George, Roxburghe and Grand Central, and believe that this acquisition perfectly complements our strategy of purchasing prime hotel assets in the region’s top-performing markets.”