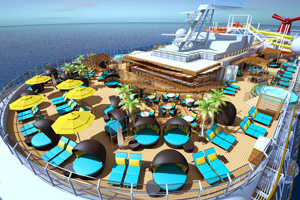 Carnival Cruise Line will make a return to Europe in 2016 when it launches new ship Carnival Vista.

The news comes after the line announced in May 2013 that it would have no ships sailing in Europe during 2014 and 2015, citing increasing airfares as the reason behind the decision.

The ship will have its first European sailing on May 1 and will then have 18 sailings in Europe before moving on to New York in October. The ship’s official homeport has yet to be revealed.

The ship will have the first IMAX cinema at sea, as well as new dining options, more alfresco dining and the biggest Waterworks of any Carnival ship. The ship will also have a new Havana pool at the back of the ship, with Havana cabana staterooms available to book.

Mark Tamis, senior vice president of guest operations, said: “I really feel and we do [at Carnival] that this is the greatest ship to date and certainly the best ship to come from Carnival Cruise Line.

“This is about building on past success. This is built of the success of Carnival Breeze and what is rolling out across the whole Carnival fleet.

“We set out to make this our most innovative ship to date. This is about creating connects and a connection to the sea. This ship, like no other ship, brings that all together.“

When the line announced it was pulling away from Europe in last year, the company said it didn’t believe Americans, who make up the vast majority of its passengers, would pay increased airfares to cross the Atlantic.

In May last year, agents were praised for switch-selling customers to book a Caribbean cruise with Carnival rather than a European one.

During a VIP agent trip on Carnival Breeze last year, Lynn Torrent, executive vice-president os sales and guest services, said the line’s bosses were watching the moves being made by other international brands. She said Carnival was sitting back and seeing what other lines were doing in the UK market before making a decision.