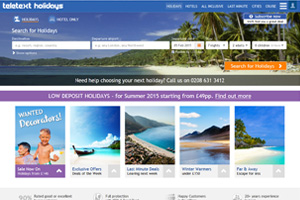 Former On Holiday Group chief Steve Endacott has returned as chairman of Teletext Holidays as the company plots a major marketing push.

Teletext plans to put its brand name back in holiday-bookers’ minds as it champions a “book by phone” message.

The campaign will be the company’s first ‘above the line’ advertising – using TV, print, billboard and other traditional media – in four years.

Endacott will lead the move on behalf of a venture capital investor, having joined Teletext as non-executive chairman in July.

The company currently has a board of Endacott, product technology director Graham Farrugia and customer and marketing director Tom Sainsbury.

Endacott said: “Teletext is a freak of nature. No retail brand ever appeared on it, but 20 million people brought holidays through the brand.

“It’s a heritage brand. It stands for cheap holidays, late availability and booking by phone.”

Endacott believes its ‘book by phone’ message will fit perfectly with the consumer shift to mobile internet use.

He said: “The shift to mobile creates more opportunities over the phone.

“The average [online travel agency] customer visits 23 sites. The average conversion is 0.7%. Customers are getting data overload. We can provide a better customer experience by phone.”

Teletext launched press adverts and bus billboard ads on a minor scale this month, but plans a bigger push this spring.

Endacott said the marketing budget would be “substantial” but declined to give a figure.

However, he said: “We will be exploiting the same sort of media as Low Cost Travel Group which has spent a substantial amount.”

Teletext signed a single-supplier deal with TTA-member Truly Travel at the end of 2013 and now provides the sole distribution channel for the company, with Truly Travel fulfilling bookings through a call centre in Hyderabad, India.

The holidays will be fully protected both under the TTA trust account and Truly Travel’s Atol. But Endacott said: “We won’t be making a virtue of bonding because the CAA has failed to make it a differentiator.

Of his colleagues on the Teletext Holidays board, Sainsbury joined from Tesco three months ago and Farrugia has been with the company since September 2013.

But Endacott said: “There is a lot further to go. Over the next three years we’ll re-engineer the whole booking process, for example to allow screen sharing and so customers can pay without entering their details.”

Endacott’s On Holiday Group ceased trading almost a year ago.