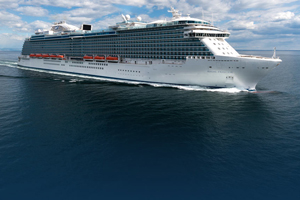 The 60-second ad, entitled Come Back to the Sea, features a speech given by US President John F Kennedy from the 1962 America’s Cup and runs alongside images of the ocean.

The ad, which was directed by Hollywood director Wally Pfister, can be watched below and at Comebacktothesea.com.

Shown during the Super Bowl, the commercial is part of Carnival’s new multi-brand marketing approach and is the first time all nine brands have worked together.

It was shot over nine days in Barcelona, with the crew spending five days onboard Princess Cruises’ Regal Princess (pictured).

Arnold Donald, president and chief executive of Carnival Corporation, said: “We worked with true passion to bring this creative concept to life with reverence and elegance to strike a chord with consumers, and we are proud to share it on the world’s biggest stage.

“Our existing guests already know that each time they go back to the seas on one of our ships, it is a unique experience that helps them connect in a special way with themselves, family, friends and the world.

“We wanted to convey that same feeling with people who have never cruised by showing the magnificence of the sera and its special place in our lives, and why cruising is a great way to relax, reconnect and recharge.

“Our overall goal is to successfully share that cruising is not what some people think it is, and to debunk untrue common myths that keep people from taking a cruise.

“We want to start among those who haven’t cruised a conversation about why cruising is such a great vacation, at an exceptional value, and why cruising is an option to consider when planning a vacation.

“And, since we have nine distinctive brands that sail 100 ships to more than 700 ports around the world, we have a cruise that’s right for just about everybody.”