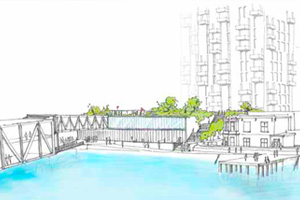 The developers of London City Cruise Port (LCCP) are resubmitting amended plans for approval, including changes to the design of the terminal itself and the offshore and onshore infrastructure.

The original plans were developed and submitted in 2010 on the basis of frequent but shorter cruise ship visits. Since then environmental legislation has been introduced that impacts the cost-effectiveness of shorter ship stays in London.

In addition, cruise lines have also indicated a preference to use the London port as a turnaround destination, requiring longer stays in port.

The changes to the plans include more green spaces and wide river walkways.

Kate O’Hara, chief executive of London City Cruise Port, said: “There is tremendous excitement and interest from the industry in using the London City Cruise Port and providing we upgrade the terminal and infrastructure to meet their changing needs, I have no doubt that we will be welcoming some of the world’s leading cruise ships to this unique mooring on the Thames.”

It is hoped the terminal will take two years to build, if planning permission is granted this summer.