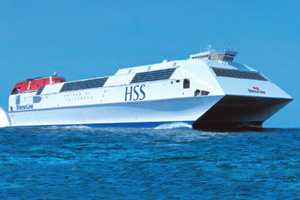 Stena Line’s fast ferry HSS Explorer service from Holyhead on Anglesey to Dun Laoghaire in Ireland is being dropped as “unsustainable”.

The company said it was consolidating its services to and from Dublin Port from Anglesey in Wales.

The HSS service, which crossed the Irish Sea in just over two hours, was run over the summer months.

Stena reduced daily sailings from two to just one in 2008 and a Christmas service was cut in 2014, causing speculation over the route’s future, the BBC reported.

The company has operated the HSS Stena Explorer into Dun Laoghaire since 1995.

The Dun Laoghaire service was successful for several years following its introduction, carrying more than 1.7 million passengers a year during its peak in 1998, according to the ferry company.

“However, post the withdrawal of ‘duty free’ shopping, passenger and cars volumes declined dramatically and by 2014, less than 200,000 ferry passengers travelled through Dun Laoghaire Harbour,” the company said. “This represented a decline of over 90% in volume, making the route unsustainable.”

“Since then volumes through Dublin Port have continued to grow, as volumes through Dun Laoghaire have contracted thus providing Stena Line with a stark choice in relation to its future route network in the region,” the company said.

Stena Line’s route manager for Irish Sea South Ian Davies said: “With two services operating approximately 10 miles apart we needed to make a decision in relation to what operation best serves the needs of our customers now and in the years ahead, and that operation is Dublin Port.”

He added: “While we have enjoyed a very professional working relationship with Dun Laoghaire Harbour over many years, the economic realities of the current situation in relation to our business levels have left us with no choice but to close the service.

“Dublin continues to grow in importance, not only as the core freight port for Ireland but also as the key tourism gateway into Ireland.”

Davies said: “Ireland remains a strategically important region for us which is why Stena Line has invested over £250 million across our Irish Sea business in the last five years alone.

“A number of economic indicators point to the continued recovery of the Irish and UK economies which has helped to stimulate renewed freight growth and returning tourism confidence in 2014.

“In 2014 we invested in a new Stena Line service to France from Rosslare and recently announced the arrival of the superferry Stena Superfast X into Dublin Port by late February.”