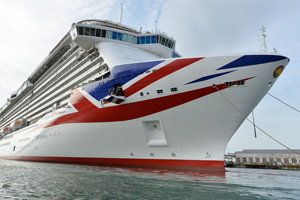 P&O Cruises has confirmed that Her Majesty the Queen will officially name the line’s new ship Britannia on Tuesday, March 10.

The announcement confirms speculation that the Queen would be performing the honours in Southampton. She will be accompanied at the naming by the Duke of Edinburgh.

Carnival UK chairman David Dingle said: “We are honoured and proud that Her Majesty will name Britannia almost 20 years after she named the P&O Cruises ship Oriana.

“Britannia, a ship for the nation, will be the embodiment of contemporary Britain, and with her Union Jack livery she will fly the flag for Britain across the Globe.”

Travel Weekly first reported the likelihood of The Queen naming Britannia on January 29.