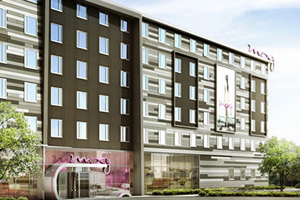 Two properties have been earmarked for London, one at Heathrow and one at Aberdeen airport, as part of the expansion which will see the addition of 25,000 rooms in five years.

The company expects at least 4,200 rooms to be signed this year as it targets cities across Europe for the brand.

The first Moxy opened at Milan Malpensa in September and is being introduced across the US, including New York City, San Francisco, Seattle, New Orleans and Chicago.

The first property in London is due to open in summer 2016 adjacent to the Olympic Park in Stratford, followed by a second close to the ExCel exhibition centre in the Royal Docks in the autumn of next year. The Heathrow Moxy is due to open in winter 2016 and the Aberdeen property in the middle of 2016.

Marriott International’s Europe president and managing director Amy McPherson said: “The launch of Moxy Milan was a defining moment for the brand; its first hotel in a gateway city that has met with widespread approval.

“Its continued expansion in the US will extend its appeal to new markets and help to establish it as a truly international brand.

“We expect that the next few years will show significant growth, helping to build brand presence so travellers can familiarise themselves with a new affordable design hotel concept.”

Other Moxy properties are planned for locations including Munich airport, Frankfurt, Berlin, Oslo, Copenhagen and Essen

Marriott expects to surpass one million rooms open or in development by the end of 2015 across its full portfolio of brands.