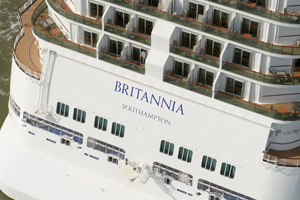 P&O Cruises’ new ship Britannia has arrived at its home port in Southampton ahead of its official naming ceremony on Tuesday.

The 3,600-passenger ship is the largest to have been designed for the British market to date.

It will officially be named on March 10 by the Queen and will sail from Southampton in the Summer and from the Caribbean in the winter.

Britannia is to make its maiden voyage to Spain, Italy and France on March 14.