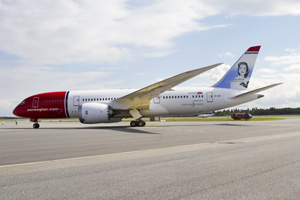 Strike action by pilots at Norwegian Air Norway enters its second week today with almost 25,000 passengers to be affected in addition to 40,000 over the weekend.

Almost all domestic flights in Norway and Sweden will be cancelled, while a few domestic routes in Denmark will be operated.

Most flights between the Scandinavian capitals will also be grounded, the airline said as a weekend report claimed that parent company Norwegian Air Shuttle is planning to set up in the UK.

The Scandinavian low cost carrier is understood to have set up a British subsidiary that it intends to use to evade a row over its transatlantic expansion.

Norwegian is believed to be behind Westforce Aviation, a company that was set up in December and is fronted by two aviation lawyers from the London law firm Ince & Co, the Sunday Times reported.

Westforce applied to the Civil Aviation Authority in January for an operating licence to run charter and schedule fights — the type of licence designed for large airlines such as British Airways, Virgin Atlantic and easyJet.

The newspaper said it remained unclear how Norwegian would use the new British arm, but quoted industry sources as saying it could opt to fold its whole venture into the business.

That would allow Norwegian to sideline a costly domestic workforce and take advantage of anglo-American air freedom treaties.

Norwegian, is based in Oslo and listed on the city’s stock exchange, declined to comment to the newspaper while the law firm did not return calls to the Sunday Times.

The airline’s successful application for an Irish operating licence for its long-haul venture, Norwegian Air International triggered opposition from leading US carriers, which claimed Norwegian was undermining US jobs by taking advantage of weaker labour laws to hire Asian crew.

US airlines and unions have labelled its use of an Irish subsidiary a “flag of convenience”, but chief executive Bjorn Kjos insists it is vital to gain better access to international destinations.