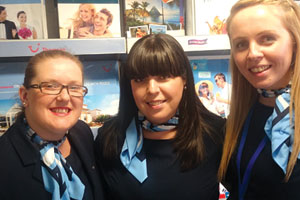 Ever since Helen Whittaker was at school, she has been passionate about raising money for charitable causes.

“I remember doing a ‘step aerobathon’ at school and every year after we used to do a fundraising event. I was always  driven to raise money for charity,” recalls Helen, manager of Thomson’s Long Row branch in Nottingham.

Becoming Thomson’s charity champion for East Midlands in 2013 as part of her role as a company ‘sustainability champion’ gave Helen the opportunity to put her fundraising passion to really good use as part of her everyday job.

It meant she could channel her energy into encouraging and organising agents across her region to raise funds for the company’s chosen causes, the Family Holiday Association, and this year’s other charity of choice, Cancer Research UK.

Moved by some of the charities’ stories, Helen decided to organise a 10-mile sponsored walk in Matlock with Thomson’s local shop managers and regional sales managers last April.

“I had to take into consideration everyone’s ability so I came up with the idea of ten fun challenges to keep up morale,” she says.

“I bought a huge pair of pants and glued on red sequins to make a Tui smile and a hashtag. Everyone had to wear the ‘pants of power’ at some point during the first mile of the walk.”

Other challenges included peeling a banana without your hands, imitating a chicken and carrying someone on your back while blindfolded.

“One of the managers was impersonating a chicken when a group of ramblers was walking past so it definitely stirred up a bit of interest!” she laughs.

It worked: everyone completed the walk and the group raised £2,000, and critically, had fun doing it. “Everyone was tired but raising that amount gave them a real boost,” adds Helen.

For Helen, charity work can not only help engage and motivate staff across the business but it can also help the business itself.

“It helps build really good relationships with your customers. I’ve been into other local businesses asking for their support and afterwards they have often come in to book with us,” says Helen.