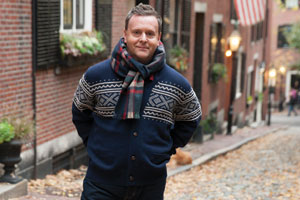 Reading about trips by Cover Stars in Travel Weekly over the past two years inspired Michael Atkinson to apply to join the select group of 12 agents travelling to Massachusetts.

“I knew friends who had been Cover Stars and I always read the articles, so I was over the moon when I got to be one,” says Michael, a travel consultant at The Co-operative Travel in Liverpool.

“I had never been to the Boston area – that was a real bonus for me. And now I’ve been, I’d like to go back and replicate the trip combining Boston and
Cape Cod.”

One of the highlights of the trip for Michael was being able to visit a walkable US city steeped in so much history, from the hotel itself to the streets and parks.

“The history of the city is amazing and there is so much to see on foot and so many different neighbourhoods,” says Michael.

Staying at the Omni Parker House hotel in the Boston Common district, located on the Freedom Trail and at the foot of Beacon Hill, was perfect for history buff Michael.

“It’s such an iconic hotel and has lots of history,” he adds. “Charles Darwin had a book club there and Malcolm X used to work there.”

For Michael to have his photoshoot in one of the oldest and most photographed parts of the city, the cobbled Acorn Street on Beacon Hill, was also fitting. And he was surprisingly unnerved, adding: “I was dead relaxed.”

As a sports fan, Michael’s most memorable experience in Boston was a special trip to Fenway Park, home of Boston Red Sox, the Major League Baseball team.

Moving on to Cape Cod provided a contrast and a great place to relax after the city.

“It has a small-town charm, lots of lovely beaches and family-orientated hotels, and it’s a nice place to chill out,” says Michael.

He adds that one of the best bits of the trip was seeing where Kennedy was brought up, went to church and played golf.