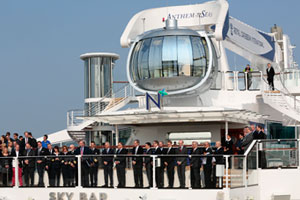 Royal Caribbean International has taken delivery of Anthem of the Seas at a signing ceremony held in Bremerhaven, Germany.

Anthem of the Seas is to sail to the UK port, where it will run an inaugural season of cruises to the Mediterranean and Canary Islands.

The line’s 23rd ship will be inaugurated on April 20, when travel agent godmother Emma Wilby will conduct the naming the ship before performing a special song for more than 1,300 invited guests and dignitaries.

The 4,180-passenger vessel’s permanent home will be in New York from November, sailing regularly from Cape Liberty to Bermuda, the Caribbean, Canada and New England.

Fain said: “We’ve always broken the mould with each successive ship we build, and Anthem of the Seas is no different.”