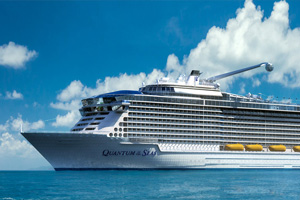 Royal Caribbean International is to deploy its next Quantum-class ship in Australia for the 2016-17 southern hemisphere summer season.

The $1 billion Ovation of the Seas, currently being built in Germany, will be the largest cruise ship to be based in the country.

The vessel is due to arrive in Sydney for the peak summer season from December 2016.

The announcement came as the line prepares for Monday’s naming of sister ship Anthem of the Seas in Southampton ahead of a summer season sailing from the UK.

The disclosure coincided with rival Carnival Corporation brand Princess Cruises confirming that it is to home port five ships in Australia for the 2016-17 season.

Emerald Princess run 42-day re-positioning voyage from the UK to Australia on September 28, 2016.