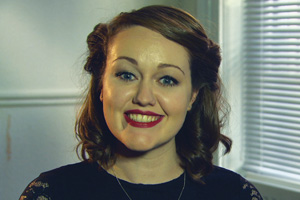 Royal Caribbean’s bosses have praised new Anthem of the Seas godmother for being a “true ambassador” for the brand.

Emma Wilby, who works at Thomson in Elgin, north Scotland, won a Royal Caribbean and Travel Weekly competition to be the godmother of the ship, which was named yesterday.

Dominic Paul, senior vice president international, said Wilby wasn’t just suitable for her singing skills, but explained that she was acting as an ambassador.

Stuart Leven, UK managing director of the line, said: “We had a great quality of entries all vying to be the godmother but Emma is the perfect fit.

“We have always been a trade friendly line and we always will be, but having an agent as the godmother of our newest ship is a big statement.”

Speaking after performing her duties, Wilby told Travel Weekly that it was “an honour” to have been chosen.

“I was really nervous before I got on the stage but as I started to sing it was really excited.

“It’s a real honour and it hasn’t really sunk in yet.

“I got really emotional when the champagne smashed, that was really special moment for me.”

Anthem of the Seas will sail out of Southampton this season before moving over to the US.